How Much E-waste Do You Throw Out Every Year?

Can you imagine 80 kilograms of discarded products with batteries or plugs piling up in your living room? That’s how much e-waste the average American household throws away each year.

The latest data from the 2017 global e-waste monitor report, released by the United Nations University (UNU), the International Telecommunication Union, and the International Solid Waste Association, shows that as incomes rise and prices fall, e-waste is now piling up every year. 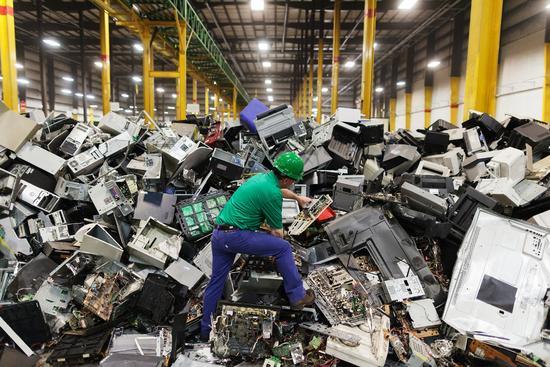 The employee inspects e-waste waiting to be recycled at the e-waste recycling plant in Holliston, Massachusetts

E-waste, including used refrigerators, televisions, vacuum cleaners, hair dryers, mobile phones, and computers, reached 44.7 million tons in 2016, the report said. That’s enough to fill 123 million 18-wheel (40-ton) trucks, which, if you put them end to end, would be the equivalent of two truck lanes between New York and Bangkok. The mountain of e-waste is expected to grow another 17% to 52.2 million tons by 2021.

In 2016, the global average generated 6.1 kilograms of e-waste per person or 24.5 kilograms per household (four people). That is 3.3 times less than the average household in the United States and Canada. What will happen to the clunky old TVs that have been replaced by flat-screen ones? It all depends on where you live. In the United States, about 70% of old televisions are collected separately, although some states do better than others.

In the United States, about 30 percent of e-waste goes to landfills, incinerates, recycles, exports as waste, or simply leaves it somewhere. According to monitoring data, 80% of the world’s e-waste suffered the same fate in 2016. “We’re throwing away at least $55 billion in recyclable materials because we’re not recycling all of our e-waste,” Vanessa Gray of the International Telecommunication Union (ITU) said in an interview.

These recyclable materials include gold, silver, copper, tantalum, platinum, palladium, tungsten alloys and other high-value metals. If all the metals were recycled from 100,000 discarded phones, we would have about 2.4kg of gold, over 900kg of copper, 25kg of silver and more. At current prices, the metals are worth about $250,000. Ruediger Kuehr, director of UNU’s sustainable recycling program, says: “We are wasting precious resources and the future production of these devices will be affected without recycling the material.” 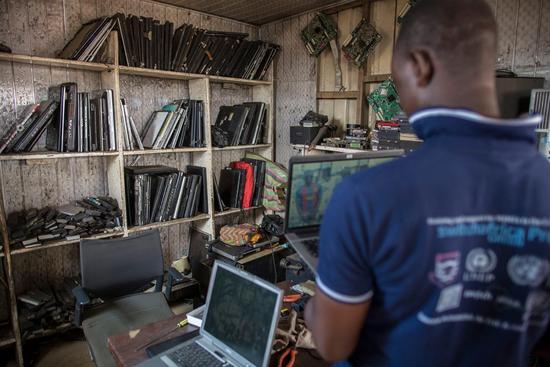 This young man is dismantling an old laptop computer in Accra, Ghana

Electronics often leave a large ecological footprint, meaning that their manufacture consumes a lot of energy and water, as well as valuable and sometimes scarce resources. Recycling them is a key way to reduce their impact on the planet, however, it is not easy. Each phone can contain 40 to 60 different elements, and manufacturers are usually less interested in making electronic devices that can be repaired or easily recycled because they are always chasing sales of new phones.

While the public demands healthier, chemical-free foods, few are looking for “healthy” electronics. “Consumers are only interested in price and performance, and that needs to change,” Gray said. The public wants universal, interchangeable phone and laptop chargers. “It’s shocking that manufacturers set up different chargers for different types of devices, even if it’s unnecessary,” says Gray.

Last year, the ITU approved a new environmental standard — universal chargers for laptops and other portable devices — but the industry’s growth remains to be seen. Offering services by changing business models rather than updating products could also help reduce the amount of e-waste. For example, car sharing is becoming more and more popular in cities, because people don’t need to buy their own cars, and cloud computing and storage are other examples.